The sixty-six year old lady behind the wheel of a 2009 white Ford Escape, a "compact" SUV, claimed she didn’t see Chief Ernie Sanchez cycling into the intersection from the opposite direction when she smashed into him head-on: because she was adjusting her glasses.  Chief Sanchez has been a cyclist since he was 15 and a strong advocate for cycling safety.

We began partnering with Chief Sanchez’s Golden Gate Division (GGD) over five years ago when California’s “Three Feet For Safety” law was enacted.  In 2014 Chief Sanchez graciously shared his time and commitment to cycling safety by participating in our webinar series where we encouraged cyclists to ride with a camera and report their near miss incidents to our free Incident Management System.  In 2015 the GGD issued a press release “Three Feet For Safety – CHP Focusing on Keeping Cyclists Safe” where they shared how our partnership “developed warning letters that are sent to drivers seen violating the Three Foot Law and other bicycle-related laws. The letters are not punitive, but rather work to educate drivers about being safe around cyclists.” In 2017 Chief Sanchez was a valued panelist in our web conference: The Impact of Near Misses and Perceived Risk on Cyclists. We wish Chief Sanchez’s good works and commitment to safe shared streets could have insulated him from distracted drivers, but sadly, no vulnerable road user is immune to distracted drivers.

Chief Sanchez is sharing his story to help convince cyclists to take the safety measures he recommends at the end of our post.  He also feels we have a long way to go for drivers to understand that cyclists have as much right to the road as vehicles.  He thinks drivers still view cyclists as an annoyance.

We hope you share your support for Chief Sanchez’s good works and his recovery by commenting below this post.

If she was going a little faster, or an inch to the left or right, Chief Sanchez wouldn’t be here to continue advocating for the safety of all vulnerable road users.

Chief Sanchez was heading north as he approached the four-way intersection in rural Solano County at about 21 miles per hour.  He had the right of way.  It was during the day and he was wearing bright fluorescent yellow colors.  The lady was heading south.  She said she was adjusting her glasses.  Chief Sanchez noticed that the car started cheating over the yellow road markings when he reflexively yelled “No, No, No.”

The next thing he saw was her license plate, which made a perfect cut into his lower leg, and her head lights.  Time instantly seemed in slow motion.  The car hit his left hip and hamstrings.  He felt the impact as it propelled him onto the hood, into the windshield, over the roof, flipping in the air and then he felt a big thump which he realized was his body hitting the ground.

He thought she severed his leg.  He couldn’t get up.  He reached down and felt his leg was there.  He moved his toes.  He landed on his left side, face down.  His helmet and glasses were in an awkward contorted position, but still on his head.

The next thing he remembered was people assisting him, calling 911, the driver of the vehicle asking him if he was OK or dead?  He heard sirens in the distance and saw a couple CHP cars.  He could not move from the fetal position.  He didn’t think he was hurt as bad as he was.  He heard people saying that he went 10 feet into the air.

The ambulance arrived.  The ambulance driver said “you will be alright” and administered some drugs.  They drove 20 minutes: it felt like forever.  He was treated immediately.  They took x-rays and sutured his elbow which had made a perfect circle in the lady’s windshield surrounded by a blood red halo.  He thinks his elbow smashing into the windshield saved him from worse injuries: it broke the windshield, his left shoulder followed further absorbing the impact and launching him into the air.

He spent five days in the hospital.  The first surgery reattached his broken pelvis with 12 screws and a metal plate.  They had to add cadaver bone to his pelvis to help with the healing. 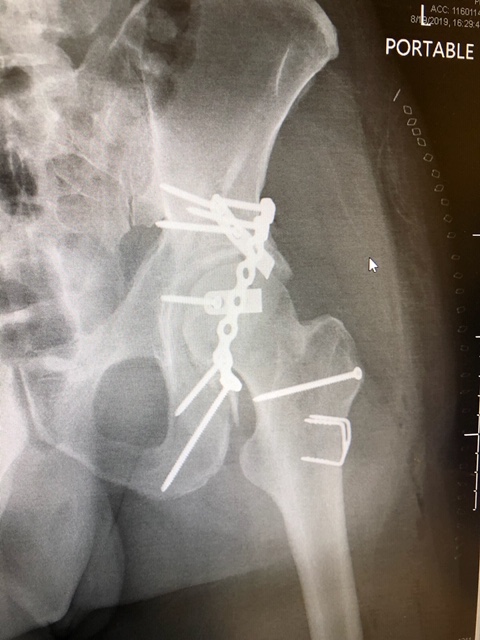 His humerus was broken from the impact of his elbow shattering the windshield. They reattached it with 10 screws and a metal plate.

He was immobilized for five days and then released. 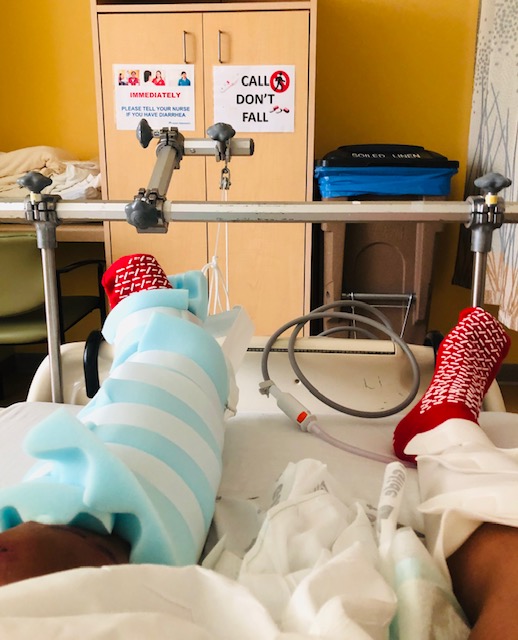 He spent four weeks in a wheelchair. This was a cyclist who would never ride for less than an hour and a half because he didn’t feel like he got any benefit. We, at CVE, think a person in less physical condition would have had much more serious injuries or be dead. Doctors told him he may need a hip replacement if he doesn’t follow their directions.

He lost quite a bit of weight because he didn’t feel like eating. He was almost at his high school weight.

He moved onto a walker to regain strength and movement along with daily physical therapy in a swimming pool. He has now progressed to using a cane. 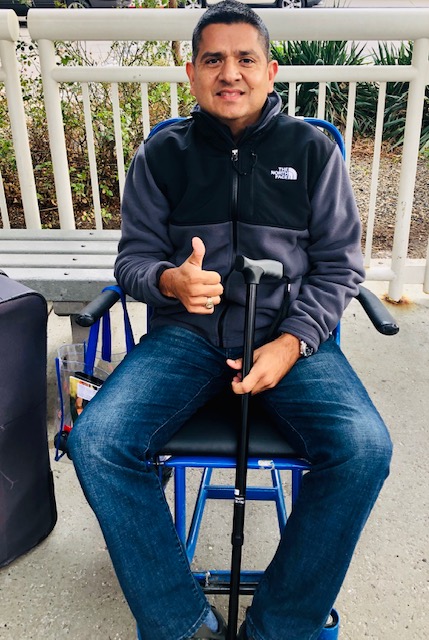 After eight weeks he finally feels like he is actually healing the last three days. He has progressed to a recumbent bicycle where five minutes feels like twenty miles. 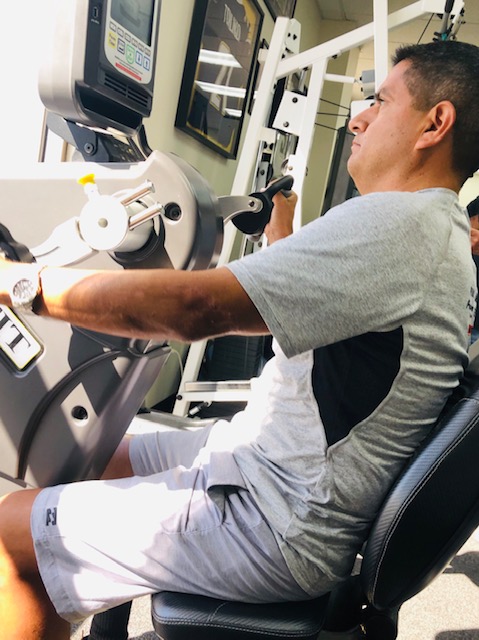 His helmet was cracked so it did its job.  He was thankful the lady stopped.  Three witnesses saw the incident otherwise he would have needed the camera we have harped on him to ride with for years.

Lessons Chief Sanchez wants to share with all cyclists

Chief Sanchez proposes that even if cyclists think witnesses saw the entire incident, you have to assume they didn’t.  All he could have said about the incident was that it was a white car.  “I got lucky there were so many witnesses and the lady stopped.”

Chief Sanchez recommends all cyclists to:

Chief Sanchez hopes to be able to ride again without fear.

No one is immune to distracted drivers. The impact of this incident is reverberating throughout Chief Sanchez’s family, friends, colleagues and the cycling safety community.

We hope you share your support for Chief Sanchez’s good works and his recovery by commenting below this post.

To share your support for Chief Sanchez you first need to register using our free membership. Once you have registered you can login below to add your comments.

Please help sustain our work by donating today and contact us if your organization would like to help by becoming a sponsor.